Why do bearings rust?What are the influencing factors?

Why do bearings rust?What are the influencing factors?

Characterized by large area, shallow depth, easy to find. The main reason for this rust is that there are moisture, dust, and gases such as SO2, H2S, CO2 in the atmosphere. In hot and humid conditions in summer, especially in places with large airflow, the peripheral of bearing stacking is prone to this rust.

It is characterized by a large block, prominent surface, yellow loose color, easy to erase the surface yellow rust, but below it is a black honeycomb rust pit. This corrosion is mainly caused by residual salt cleaning or parts with water droplets.

When bare hands are held and placed on bearings and parts, sweat is caused by rust. There are lactic acid, sodium chloride, water, and so on in hand sweat, especially in summer. The shape of rust is fingerprint rust.

It is characterized by shallow depth, easy to erase with emery cloth, no rust pit scars after rubbing, and the end face of the stacking ring is easy to produce this kind of yellow rust. The main processing fluid overlap is poor, the overlap surface of the ring due to uneven inflation caused by the concentration of corrosion.

It can be wiped off at the beginning, and rust pits and scars can be produced over time. The reason for this rust is that after writing acid words, the neutralization is bad, or the acid liquid is stained on the product. It can also be caused by the poor rust resistance of the wrapping paper, and the black rust is produced at the contact place of the packing box after being dampened.

There are many forms of black spots, which are characterized by small areas and large depths. They are not easy to observe in sunlight and can be seen clearly under light or magnifying glass. There is a black dot only a small needle tip, the outer color is light and the middle is a circular black hole. This rust can not be wiped off with general gauze. The reason for the black dot is that the surface of the parts is stained with grinding wheel chips, and the cleaning is not clean, especially the rubber grinding wheel and resin grinding wheel chips.

The defects caused by the "three injuries" (bumps, scratches, and abrasions) usually seen on the bearing surface should be distinguished from rust. But damage part is particularly prone to the cause of rust, with the wound, because three wounded and embryo are destroyed potentials more negative as the anode oxidation film, no wounds as cathode, at the same time three wounds contaminated easily and accelerated electrochemical corrosion, so there are wounds often become black, such as the life down from a plane grinding disk, easy to cause in the plane grinding wheel crumbs pad to injury produce smaller, As time goes by, it becomes a black spot. 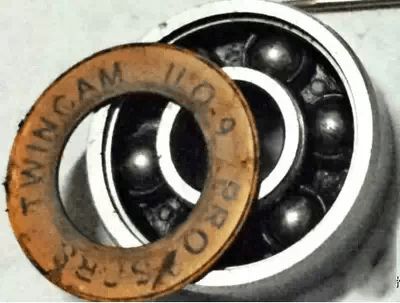