What is the true level of Bearing in China?Is it really rubbish?Break down your old ideas

What is the true level of Bearing in China?Is it really rubbish?Break down your old ideas

In fact, made in China have already thoroughly remould oneself, our country's high-speed rail, for example, has the world's largest high-speed rail network, while huawei mobile phone and take the lead in research and development out of 5 g, the stability of xinjiang unmanned aerial vehicle (uav) and wireless image transmission, is a leader in science and technology, we going to talk about today is bearing areas in our country, bearing the problems, after all, China for many years,It is not easy to be sophisticated, so what is the true level of Bearing in China now?Let me break your stereotypes today.

Bearings play an irreplaceable role in all aspects of our life, from the ground to the shared bike, to the sky to fly a variety of planes, are inseparable from bearings.

Manufacturing industry is also the basis of a strong country. After the reform and opening up, China's industry, which was originally weak, has made great development. China has become the only country with the listed industries in the world and the largest manufacturing country in the world.

However, at present China is a manufacturer, no question about it, yet there is a large gap compared with manufacturing powerhouse, China's industrial structure without strict standards, production quality is uneven, have no place in the general manufacturing industry in our country, but the achievement in bearing industry of our country is really incomparable, China is undoubtedly a bearing power.

According to statistics, in 2014, China's bearing production has reached 19.6 billion sets, ranking third in the world, but at that time, we can not be called a bearing power, because there is a big gap between China and some developed countries in the reliability and life of bearings.

Although most of the bearings in China to be able to use domestic bearing, but part of the performance is still not stable, so in the high-end products need bearing needs to be imported from abroad, however, our country faces the dilemma has been broken, a bearing factory has its own production of luoyang bearing do related test, can keep good performance under high-speed high-speed run,Then the durability test was carried out.

Only the grinding and grinding of the bearing housing must go through 87 processes. After tens of thousands of tests, the accuracy of the internal parts of the bearing has been greatly improved, even twice that of some countries.

Once upon a time, at that time in the world's manufacturing middle China can in some ways and compare the top countries, now China's bearing industry because of their mature technology, quality of products are produced in a huge increase, industry also further expand the scale, and to break the western countries technology blockade of our country for many years.

China's manufacturing industry is growing. Since 2010, China has become a major manufacturing country in the world for many years, and is striving to become a manufacturing power. A large number of innovative products with independent intellectual property rights continue to emerge.

Can science and technology be viewed with one side of the argument?

I asked a lot of net friend, they all think we China bearing no, ask them why not many people answer is our own factory in China heat treatment, but bearing in China as netizens said really so unbearable, actually a lot of people may not know, the Chinese to foreign enterprises took the raw materials, including the United States, Germany, Sweden and other precision,Not only the key parts of bearings, some even the finished products of bearings, let me talk about the true level of China's bearings.

And after the sale of products is also no complaints from users in terms of quality, wondering about island don't understand what people may think this is a lousy small company, but it can play a leading role in the international precision steel ball, even in Japan's giant steel ball very confident in China, some people also need not always belittle domestic steel ball.

Next, let's talk about the application of bearing parts in Chinese enterprises. In terms of the production of general steel balls, the general steel balls produced in China have been applied to the automobile and wind power industry, and the customers are well-known, such as GENERAL Motors, Toyota, etc.

Bearing ring is also very important parts, bearing ring now export products export in our country is also on the list, day letter seiko company and dalian bearing cage valley technology company dedicated to research, and the bearing cage industry in our country plays an important role, has now been applied to the BMW, ford, etc. In the auto industry.

Now the manufacture of Bearings in China is no longer the time to accompany runners and play the light of domestic goods.

China's 4,300-ton shield machine is cutting through the Himalayas to build its first high-altitude railway

China is building the world's largest port for 70 billion yuan, surpassing the throughput of the United States, but Singapore cannot sit still

China built a bridge across the sea on 88 wheels, leading the world in strength and strength, even the United States wants to get it 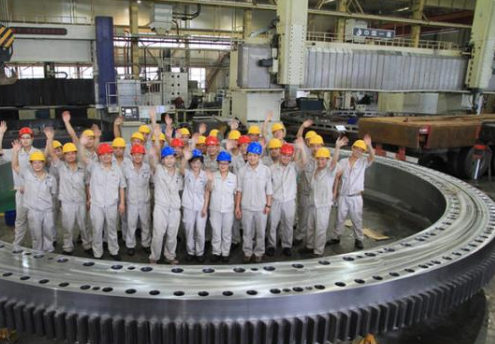