One of the key parts in the working process of the rolling mill is the rolling mill oil film bearing, which has a very wide range of application values. However, in the specific operation process, due to various factors such as management and installation, various failures will occur, which have an adverse effect on its performance, and it should be effectively maintained.

Rolling mill oil film metal bearings mainly include taper sleeves, bushings, sealing systems, locking systems and thrust bearings and other components, which have different functions. Among them, the role of the taper sleeve is mainly reflected in the effective connection of the stop key and the roll. The bushing is mainly used for the installation of the outside of the taper sleeve, which can realize the effective connection of the special fixed pin and the bearing seat. In use, the oil film in the bearing should be in a closed state, which requires the use of a sealing system, which can reduce or prevent some foreign objects from entering the bearing cavity. The locking system is used in the realization of the function of locking the oil film seal. At the same time, the role of the thrust bearing is mainly reflected in the corresponding selection according to the specific situation of the oil film bearing. The main types include ball type, There are three types: flat type and roller type.

Rolling mill oil film metal bearings have the advantages of large bearing capacity and strong impact resistance during specific applications. The unit pressure can reach between 22MPa and 25MPa. Under the premise of increasing speed, the load capacity can be increased to ensure good achievement of performance. At the same time, the size of the structure is relatively small and has a relatively long service life. 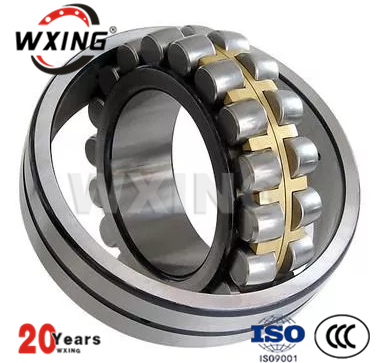 At present, online monitoring devices are generally installed in the lubrication system of oil-film metal bearings of rolling mills, which can realize corresponding interlocking control according to specific pressure changes, changes in flow and temperature, etc. The use of this operation requires the full judgment of whether the detection data exists Abnormal conditions, so as to select the corresponding inspection scope and judgment object, which requires effective online maintenance work. The specific maintenance methods are mainly reflected in the following aspects.

In the current operating system, the lubrication system of most rolling mill oil film metal bearings is generally equipped with a flow switch device. Once the oil supply is insufficient or there is no oil during operation, the automatic alarm system will appear, but the thrust bearing supply The oil is generally provided by branches in the autonomous oil supply pipeline, and there is a lack of installation of flow monitoring devices.

According to this design, in the process of replacing the bearing roller system, it is necessary to pay full attention to the connection and installation of this pipeline, so as to effectively avoid the occurrence of bearing oil shortage and burning in the later working process.

In terms of system design, the rolling mill oil film lubrication system generally includes two components: a mailbox that is put into operation and a standby operation mailbox. The liquid level of the standby mailbox should be maintained at two-thirds of the position, so that the oil has sufficient Time of separation.

At the same time, it is also necessary for the staff to fully check the test conditions of the oil inspection and the changes of the system level in time, so as to provide a basis for decision-making on whether the mailbox needs to be replaced. While carrying out this working system, it is also necessary to pay attention to the regular bottom drainage of the single oil tank system and the rational use of the oil-water separation system to ensure that the oil film lubrication function of the rolling mill has relatively good stability.

In the process of disassembling and assembling the oil film bearing roll of the rolling mill, the oil return area of the bearing seat needs to be checked separately. Once there are metal particles or grinding phenomena in the area, the bearing should be disassembled.